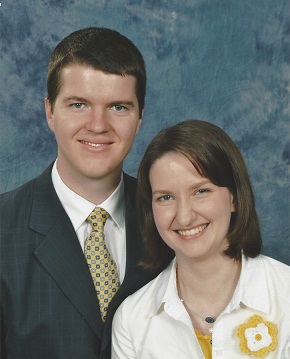 Daniel has been married to his wife, Elizabeth, since June of 2010. Together, they have three daughters and one son; Esther Hope, Lydia Grace, Anna Patience, and Lucas Daniel. Elizabeth is the daughter of Roger and Mary Bergman, missionaries to the Basque region of Spain. Daniel and Elizabeth met each other in the providence of God at Foundations Bible College in the fall of 2006. Elizabeth lived in Spain with her parents, assisting in their ministry to the Basque region, until she came to the States in 2006 to attend college. The couple became engaged to be married in August of 2009, and it was confirmed to Daniel’s heart through the Word and providence of God in the fall of 2009 that he was to take a leadership role under Pastor Peacock following his graduation. However, it was in the end of January 2010 that Dr. Peacock went home to be with His Lord. Daniel was ordained to the ministry in February and officially voted in as the Pastor in April of the same year. He graduated with a bachelor’s degree in theology in May, and his desire going forward is that he might properly shepherd the flock over which God has appointed him, while magnificently promulgating and militantly contending for the Faith of the Gospel.  His desire is that God will truly bring spiritual fruit to this ministry, and that it will be a light in Rocky Mount as well as a blessing to the true Body of Christ around the world!